The Gulf, its people and landscapes; Arab women's lives; Stoning the Devil, my novel-in-stories 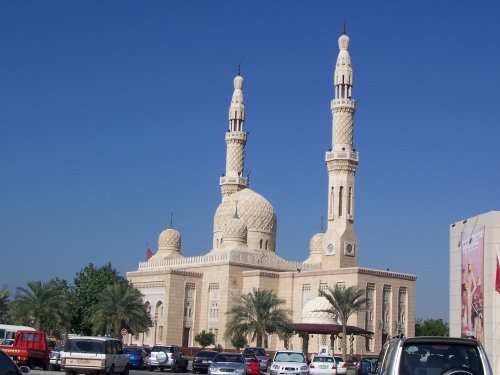 Here’s an extract from “A Woman’s Weapon”, in Stoning the Devil. Fayruz is the Lebanese-Palestinian wife of Colin, an English professor. She’s in her apartment, worrying about where her errant husband, and while listening to the muezzin call the faithful to prayer from a minaret (in fact the call is usually recorded nowadays) and watching an Afghan truck driver praying, she starts to have a flashback of traumatic memories of the massacres of Palestinians carried out by Christians and Israelis at Sabra and Shatila (refugee settlements outside Beirut) in 1982:

Allahu akbar! Allahu akbar! The muezzins’ cries broke almost simultaneously from a dozen minarets, filling the sky like a flock of wheeling, screeching, scattering birds. The Afghan spread his mat on the ground beside his truck. God is great! God is great! The echoes tripped over each other, moments apart, high and low, harsh and sweet, poignant, pregnant with longing, as the English said. She had been pregnant with the child of a Muslim militiaman, she couldn’t be sure whose, conceived in a car or an alley, who knew, there had been so much sex, snatched in lulls between the fighting. Trousers round their ankles, those boy-men had fired off their semiautomatic sperm. There is no God but God—but God—but God, the holy cretins sang, and Mohammed is his prophet, prophet. The Afghan knelt. Fayruz hadn’t prayed since the massacre.

The mosque in the photo–which was again taken by Yolanda Reinoso, so thanks to her–is a fairly typical modern mosque in the Gulf. I always liked the proportions of this one. Jumeirah, as I’ve mentioned before, is a pleasant part of Dubai, mostly low-rise Spanish-style villas. A lot of western expats live here. So too does Randa, Fayruz’s sister-in-law, after her divorce from her unfaithful husband, the banker Marwan. Randa’s married Emirati lover, Khalifa, provides a ‘love-nest’ for her in a high-rise block with a view of the beach; he also gives her a sports car and clothes. This is a common arrangement in the Gulf, as it was in European countries in the nineteenth century. Incidentally, it’s not at all uncommon to find western women being kept by Arab lovers. They live very well, too. I had a friend from Guinea, a deeply religious man–in fact the imam of the Durham mosque–who told me that I should find myself such a lover when I went to the Emirates. He assured me that I could find a beautiful Somali or Sudanese woman for a very reasonable price.

On Fridays, all male Muslims are supposed to attend the mosque for prayers. In the Gulf women are not allowed into most mosques, though there are mosques for women, for instance on the women’s campuses of the universities. In general, though, women have to pray at home. (However, in some countries, women can attend the mosques. In Turkey, for instance, I saw women in the mosques, though they were kept apart from the men, at the back.) Non-Muslims can’t enter mosques in the Gulf either, so although I have been in mosques in Delhi, in Istanbul, and Kenya, I have never been in one in the UAE. On Fridays the mosques are packed to overflowing. Many worshippers have to spread their prayer mats outside, on the sidewalks or pavements or even in the road, and traffic comes to a halt. (It’s light anyway at this time). The sermons are broadcast on loudspeakers and can be heard all over the city, whether you want to hear them or not. They’re often passionate; you hear angry imams haranguing the faithful about many issues, especially political ones like the ‘Zionist entity’ (Israel). The imams are not professional clerics in Sunni Islam, though